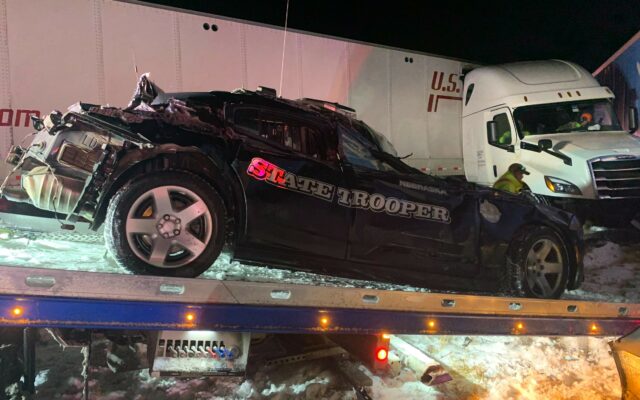 GRAND ISLAND- Nebraska State Troopers responded to more than 150 weather-related incidents during the winter storm that covered much of Nebraska with snow on Friday.

One of those incidents involved a trooper’s patrol unit being struck by a semi, while the trooper responded to another crash. At 8:50 p.m. Friday, emergency crews responded to a crash near Elm Creek on Interstate 80. An eastbound semi had lost control, crossed the median, and struck another semi and an SUV. The driver of the SUV was treated for non-life-threatening injuries at the hospital and has since been released. While responding to that crash, a trooper parked his patrol unit in the median. Another semi then jack-knifed while approaching the crash scene and struck the patrol unit, totaling it. The trooper was outside the vehicle at the time and was not injured, nor was the semi driver.

The entire crash scene blocked both directions of travel on Interstate 80 for three hours.