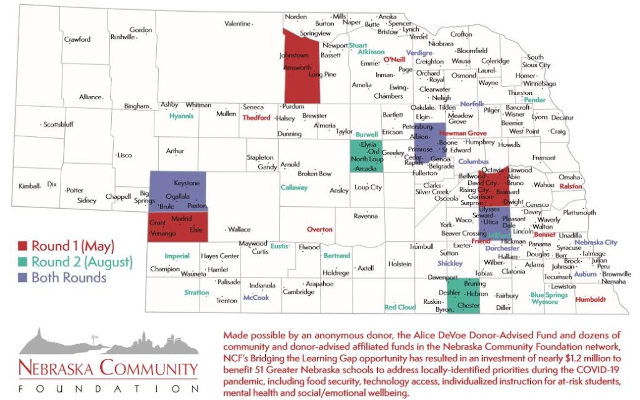 The first round of funding, announced in May, resulted in over $263,000 of grants to schools across the state. The second round of funding includes an over $304,000 investment from an anonymous donor and the Alice DeVoe Donor-Advised Fund, as well as a handful of local donor-advised funds, affiliated with Nebraska Community Foundation. Locally, the Boone County Foundation Fund will purchase devices, software, a social-emotional health screener and mental health curriculum as well as provide professional development and support to special education students, while the Columbus Area Future Fund will purchase protective cases for iPads. The Norfolk Area Community Foundation Fund will purchase mobile hotspots and service plans.

President and CEO of Nebraska Community Foundation Jeff Yost said the first round of applications was highly focused on putting devices in the hands of students as they made the transition to remote learning. In round two, Yost saw a notable increase in applications aimed at providing mental health resources and efforts to support unfinished learning as a result of classrooms going virtual.